Dismantling Democracy: The forty year attack on government and the long game for the common good 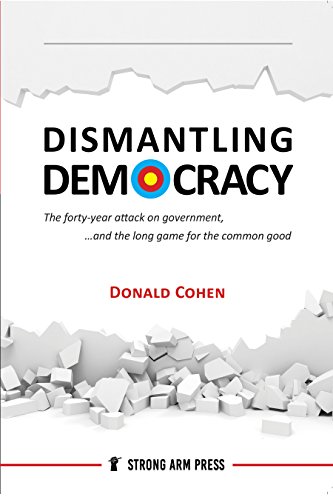 Since the 1970s a constellation of aligned conservative institutions, grassroots issue groups, academics, intellectuals, industry leaders, and politicians has been enormously successful at shifting fundamental attitudes toward government and its basic role in American society. These groups have focused on winning the hearts and minds of the people not with detailed policy prescriptions but with a set of beliefs and conventional wisdom, a vaguely defined national philosophy that protects the privileges of the wealthy and powerful. There wasn’t one strategy or one secret plan but rather multiple strands, sometimes parallel and sometimes in competition, that in concert have amounted to an effective attack on government. Part I of the paper is an attempt at an analysis of these strategic directions in order to expose their essential elements. Part II describes ten strategies to build a movement and a nation rooted in protecting and advancing the common good. Dismantling Democracy is not about the next election. It is not about policy or specific elements of a progressive agenda. It is a call for serious inquiry, discussion and debate by those who believe in democracy and the common good.