The Populist’s Guide to 2020: A New Right and New Left are Rising 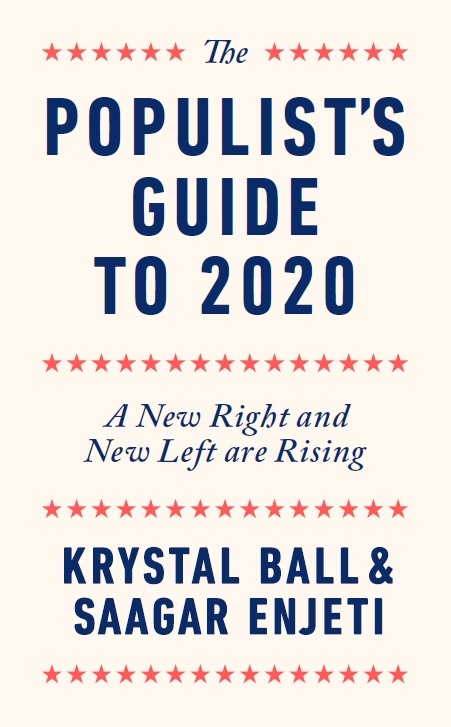 Krystal Ball and Saagar Enjeti are co-hosts of Rising at The Hill TV, one of the fastest growing political shows in America. Theirs is the only book that fuses the populist right and populist left to explain the rise of the Trump and Sanders movements. The authors curate an essential collection of their biting commentary, stunning predictions, media critiques, and reveal their vision for a working class centered politics. No establishment media or political figure goes unscathed. This book reveals the white hot core of The Hill Rising’s meteoric rise in the alternative media space.

We are living through chaotic, nerve-wracking, and occasionally terrifying times, but we hope you will find this book both hopeful and helpful. Nothing has made us more hopeful than our work together on Rising, watching what unfolds, laughing at the absurdities, and joining in our outrage at the often bipartisan rituals of manipulating our fellow citizens and viewing them with contempt. People are often confused by our politics and how much we end up in agreement. Ultimately, we have largely different policy prescriptions and beliefs. However, we do share a central diagnosis of the rot in this country, of how we got to this place, and a deep skepticism of power. It’s amazing how far you can get when you start in the same place with a shared understanding of reality. It’s a hell of a lot further than the shallow, fake civility politics that the forces of the status-quo say you must embrace-‘Keep quiet and hold still while they rip you to shreds.’ We take the opposite view. Speak up. Make people uncomfortable. Don’t let the “experts” convince you that better isn’t possible.

What They Are Saying:

“As we saw in 2016 and we’re seeing in 2020, many in the mainstream media just don’t get what’s going on in this country. Krystal and Saagar, however, see the trends that are impacting Americans across this country, which is why their election coverage has been some of the best out there. They’re some of the only people talking about the need to rewrite the rules of the 21st century so they work for Americans again.”

“The striking thing about revolutionary moments is that almost nobody understands them as they’re happening. Saagar Enjeti and Krystal Ball do. They know exactly what’s going on in our country right now, and they can explain it with near-perfect clarity. This is a tremendous and important book.”

“Krystal and Saagar weave a poignant and righteous web of reflection of the political climate we are in. They call out the role elites of both the Democratic and Republican parties play, including the mainstream media, in propping up a rigged system that ignores the needs of the working poor and middle class. This is one of the best political books I always knew I needed. Ultimately, The Populist’s Guide to 2020 reminds us that no matter how the elites try to thwart the progress of the majority, our Rising is in our hands.”

“Rising brings a refreshingly bold and rare voice, shining a spotlight on how inextricably tied together the corporate media, foreign policy establishment and war machine are in Washington. While representing different ends of the political spectrum, Krystal and Saagar bring voice to so many Americans across party lines who have had enough of the stupid, wasteful wars the war machine is championing that have cost us so much in lives and taxpayer dollars. Ending the pay-to-play culture in Washington can only happen with leaders willing to speak the truth. Krystal and Saager are unafraid and doing just that.”

“Krystal and Saagar are the indispensable new media stars. They’re raw truth tellers beholden to nobody and nothing but their own conscience. They marry the populist left and populist right in a perfect balance of outsider wisdom. They’re the future of politics and this book demonstrates that perfectly.”